A natural herbal healthcare centre, run by the doctors of a royal family of tribals, was inaugurated here on Wednesday by T.T. Palaniswami, Deputy Superintendent of Police, Pollachi sub-division. 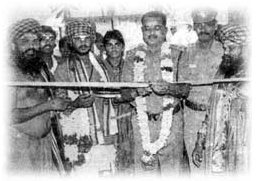 Sahadevaraju of tribal royal family is the chief physician of the clinic. Treatment will be provided for all major diseases like asthma, cancer, diabetes, paralysis and epilepsy besides gynaecic problems like menstruation, Sahadevaraju said. Only herbal medicines, which do not have any side-effects, are used for curing the diseases, he added saying that the period of treatment may range from three to five years.

Inspector Ramalingam of Pollachi east police station Dr.Krishnaraju and others were present at the inaugural function.