More over allopaths, the medicine man is here

Away from the bustle of the City, in Subramanya Colony of Hebbal Guttadahalli are a couple of tents pitched by the roadside. Outside them sit some men wearing very colorful turbans, their foreheads besmeared with holy ash and kum kum. They are busy, grinding away at their mortars and pestles. They are the medicine men of a tribe from Gandasiri, a forgotten village near the temple town of Bhadrachalam in Khammam district of Andhra Pradesh.

A 12 member group of the tribe has pitched its tents in Hebbal Guttadahalli, and intends staying there for six months. Their chieftain is P. Sahadeva Raju, who looks like he has stepped out of a painting. He has the dignity and bearing of a born leader, and confidence seems to be his middle name. The system of medicine they practice, is several hundred years old, he says. But his views are surprisingly modern - though his clothes are a mix of the old world and the new. 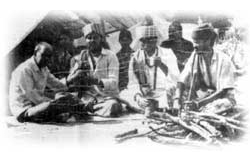 Sahadeva Raju and his tribesmen with a patient

"Gone are the days we used to wear the tribal regalia including several necklaces of beads and semi-precious stones and headgear," he says, a trifle apologetically. "We speak fluent Telugu and Hindi, picked up from our stay in cities treating people for the past several years."

His tribe is actually from Bastar which was ruled by the tribal king Praveer Chandra Bhanjdeo. The late D.P. Mishra's bid to dethrone the tribal king and to install his brother resulted in a bloody war in which the king was killed. Then followed clashes between the police and tribals.

The tribe, unable to bear the harassment, shifted to the Bhadrachalam jungles adjacent to Bastar, he says. (Khammam, Bastar and parts of Orissa are contiguous and constitute a single tribal belt with a common culture and disalects.) Sahadeva Raju, like many other tribals of his own clan, strayed into cities in a bid to popularise his tribe's medicines. He claims to have trained a large number of his tribesmen in this system of medicine.

He is contemptuous of fortune telling or palmistry which most tribes claim to be experts in. He is a pure medicine man. "My medicines are straight out of Nature. Every medicine we make is blessed by the Nature God. We don't have books. But everything is in our memory, and is passed on from one generation to the other.

To continue our traditions and to meet the modern challenges we have sent about 34 tribal boys to Vishakhapatnam and other towns to study Ayurveda. They have already started recording our medicines in book form. While they will get themselves trained under institutions, we will carry on our tradition of experience," Sahadeva Raju says. "Nature has an abundant store of the bases for our medicines. We store some special herbs selected from jungles, where chemical fertilisers are not used. For, insecticides reduce the efficacy of medicines. Except for Cancer, terminal TB, Polio and such serious ailments we can cure all diseases," he claims.

Sahadeva Raju does not want the rich to come to him for treatment. He would welcome poor patients, he says, and assures you that his medicines have no side effects. He has not been taking money for most of the medicines he has been dispensing, but needs money for herbs which he has had to buy locally.

"One day someone will recognise our ways, and that day is not far," he says, with supreme confidence. He and his group meet patients from 8 a.m to 10 a.m. everyday. In evenings he is available till 8 p.m. The rest of their time is spent in preparing medicines. Sahadeva Raju is already going places! For a start, he is going to Singapore on the request of some of his patients he had treated earlier, he confides proudly. He will treat his travel abroad as a recognition for a tribal medicines at the international level and not as a personal achievement, he tells you in a modest aside. That is Sahadeva Raju for you. (Would 'Mr Tribal Dhanavantri' be a better name?)