Spreading the miracle of tribal medicine

Embracing the experience of rummaging through the forest shrubs, and the confidence of successfully experimenting with these to cure chronic diseases, a group of tribals strayed into the city the other day. These nomads of the tribal clan from the somnolent Gandasiri village near Bhadrachalam in Khammam district of Andhra Pradesh are touring the country with an objective of spreading "the divinity of Adivasi medicines."

Their branch of medicine is crude. But they claim it is highly effective. Says B.Sahadeva Raju, the chief of the tribe. "Nature is an abundant store of herbs with several magical characteristics. But not many are aware of the magnificence of these plants. We, who are brought up in the lap of nature, know about all this." Dressed in the tribal regalia and bubbling with confidence, Sahadeva Raju, claims that tribal medicine can cure all ailments except the malfunctioning of kidney, heart troubles which need surgery and elephantiasis. In the same breath he gives a guarantee to cure cancer, TB, Diabetes, Asthma, Epilepsy, Impotency, Skin diseases and Jaundice.

"Even to solve problems of infertility and impotence we have herbs. So too for birth control." claims Sahadeva Raju. Similarly, for antenatal complications also the tribals never approach a doctor. They have herbs for these. "when the time of delivery approaches we give the pregnant woman a medicine and this makes delivery problem-free," claims the tribal chief. Through our diagnosis we, to an extent, can even predict the sex of the baby, he adds. 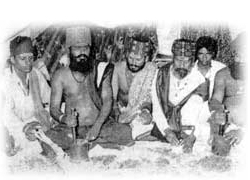 The diagnosis is simple. He reads your pulse for a few seconds and then gives a brief commentary about your constitution, the cause for the ailment and concludes with the prescription. The young members of the tribe wait for him to prescribe the ingredients and as soon as he details them they start working on their mortars and pestles. In no time the medicine is ready.

There are no fixed rates for the treatment. This is mainly because Sahadeva Raju does not believe in selling "the tradition." Our endeavour is to inculcate an awareness about this branch among the people. And if we demand money it is a crime against god, he says. However, he adds that many patients gives them Dakshina for the favours received.

"All the herbs grow in the forest so we are not paying for them. Hence selling them for money cannot be justified," says Lakshman Rajugaru, another prominent member of the clan. Even though these tribals stress the need for more awareness on this branch of medicine they are against the idea of cultivating herbs on a commercial basis. "For getting more yield people will use chemical fertilisers and this will eventually affect the efficacy of the healing powers of these medicines," opines Sahadeva Raju.

Though many offers were received for marketing the techniques behind these unique medicines, we turned down each of them for we are not here to make a fast buck, he adds. The tribe always believed in living a simple life in the deep forests. Underscoring this point, another elderly member of the clan P.Ramados Guru recalls: The Chief Minister of Madhya Pradesh, Mr.D.P.Mishra, during his tenure, assured the tribal king Praveen Bhanje Rao of various facilities for the tribals in return for votes.

However, the tribals, who have their own concepts about administration, refused the offer. Ramadas Guru continues the story: "Later, Mishra lured the brother of Praveen Bhanje Rao and tried a coup. This was followed by a series of encounters with the police, forcing the tribals to beat the retreat. They moved into deeper into the forests and continued to stay there till nature's elements disturbed them in 1985 when hundreds of tribals were killed in floods. Subsequently, the government allotted permanent dwelling places and farm lands for these Adivasis.

Their life was, however, not the same anymore. Adjusting with the irrevocable change the tribals began to cultivate chillies in their patta lands. Says, Sahadeva Raju: "Revenue from the yield made us rich. But we were haunted by the nostalgia of our early life-style. Eventually we decided to travel and the spread the greatness of our medicine." During these travels, this dogooder made quite a few friends, including several prominent personalities, politicians and matinee idols. Moreover, he got a better understanding about other systems of medicines and "also how effective our branch was in comparison with them."

Out of this realisation comes the tribal chief's decision to set up an organisation to propagate Adivasi medicine. Sahadeva Raju says: "We propose to set up an Ayurveda Sansthan. As the first step, we are planning to send a few of our children to study Ayurveda, so that it will help them to write books about Adivasi medicine." But in the back of his mind there is a small doubt. "There are several quacks who tour the country as Adivasi doctors. Stories of their cheating are aplenty. So will the public with their "once-bit-ten-twice-shy" attitude accept our interest?" he doubts.