Hebbal : Bare-chested tribal chief Sahadeva Raju claims to have a cure for the most diseases barring cancer, terminal TB, Polio and AIDS. He treats people for ordinary ailments and charges very little and only because he needs money for buying herbs. 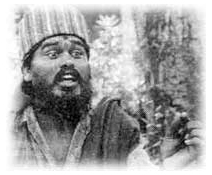 Sahadeva Raju, who has pitched a tent at Subramanyanagar in Hebbal Guttadahalli along with his 12 member team, is a medicine man from Gandasari, a village near the temple town of Bhadrachalam in Khammam district of Andhra Pradesh.

He is illiterate but rattles off English and Hindi with amazing ease. He learnt the art of healing from his ancestors. It took hundreds of years for his predecessors to rummage through jungle shrubs and evolve the system of medicine which he practices today. Though the system is several hundred years old, the tribal chief's views are surprisingly modern. Though unlettered himself, Sahadeva Raju knows that education plays a pivotal role in the all-round development of mankind. He has got 35 youth from his tribe admitted to various universities in Andhra Pradesh to study ayurveda.

When they complete their studies, he says, they will be better equipped to combine the scientific knowledge with the tribal. He aspires to set up an ayurvedic centre with their help to produce ayurvedic medicine on a large scale so as to provide succour to patients all over the country.

His list of friends and patrons now reads like a who's who of politicians, bureaucrats and filmstars. He now plans to visit Singapore. He will be in the city for another four months.